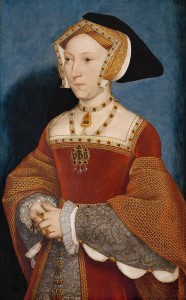 But what of Henry’s wife, Jane? Despite the long labour of 2 days and 3 nights Jane was very much alive and had recovered well enough to receive guests after Edwards sumptuous christening 3 days later. In later years rumours surfaced that Edward had been born by cesarean and that Henry had sacrificed his wife’s life for that of his unborn child by ordering that one be performed. However, if Jane had been well enough to receive visitors so soon after Edward’s birth this simply couldn’t have been the case.

So, what went wrong for Jane and how did this momentous occasion turn into such a tragedy less than 2 weeks later? Sadly in an age before proper hygiene, or any understanding of infections, mortality rates for women during and just after childbirth were extremely high; this applied to rich and poor, royal and commoner alike. On the 18th October, just as Jane’s family were riding high and being rewarded accordingly by Henry (her brother Edward was made Earl of Hertford and her brother Thomas had been knighted that day) Jane fell ill with what we believe to be puerperal fever (childbed fever). This was a common infection, the same one that had killed Henry’s mother, Elizabeth of York, back in 1503. 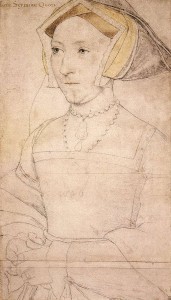 Jane fought the illness for a few days and on the afternoon of the 23rd October her chamberlain, Lord Rutland, reported that she had had “an naturall laxe,” but that didn’t last. After being “very sick” all night it was reported at 8am on the 24th October that Jane’s health was failing; her confessor had been with her all that morning and was now preparing to minister the Sacrament of Unction. The situation was looking so bleak that the Duke of Norfolk wrote to Thomas Cromwell at 8pm urging him to come to Hampton Court to comfort Henry:

“My good lord, I pray you to be here tomorrow early to comfort our good master, for as for our mistress there is no likelihood of her life, the more pity, and I fear she shall not be on lyve at the time ye shall read this. At viij at night, with the hand of [your] sorrowful friend, T. Norffolk.”

Norfolk was right, a few hours later, just before midnight, Jane died. She was only 28 years old and had been Queen for less than 18 months. Most tragically of all she had given Henry his longed for son, her only child, but the cruel hand of fate had snatched her away from him after only 12 days. The churches which had been places of celebration were now covered in black and solemn masses replaced the rejoicing choruses of “Te Deum”. Henry was understandably devastated, in response to a letter of congratulations on Edward’s birth from Francis I of France he wrote that “Divine Providence has mingled my joy with the bitterness of the death of her who brought me this happiness.”

Jane’s funeral was held on the 12th November and was arranged, according to custom, by the Duke of Norfolk, in his role as Earl Marshal, and Sir William Paulet as the Treasurer of the Household. Antonia Fraser writes how during this time Henry “retired to a solitary place to see to his sorrows”. Jane was laid to rest in St George’s Chapel in Windsor which is where Henry also chose to be buried when he died in 1547, next to his most beloved wife; mother of his son.