“All the walls between the King’s place and the Friars were hanged with arras, and the way strewed with rushes. The Friars’ church was also hanged with arras. The font, of silver, stood in the midst of the church three steps high, covered with a fine cloth, and surrounded by gentlewomen with aprons and towels about their necks, that no filth should come into it. Over it hung a crimson satin canopy fringed with gold, and round it was a rail covered with red say.

Between the choir and the body of the church was a close place with a pan of fire, to make the child ready in. When the child was brought to the hall every man set forward. The citizens of London, two and two ; then gentlemen, squires, and chaplains, the aldermen, the mayor alone, the King’s council, his chapel, in copes ; barons, bishops, earls ; the earl of Essex bearing the covered gilt basons ; the marquis of Exeter with a taper of virgin wax. The marquis of Dorset bare the salt. The lady Mary of Norfolk bare the chrisom, of pearl and stone. The officers of arms. The old duchess of Norfolk bare the child in a mantle of purple velvet, with a long train held by the earl of Wiltshire, the countess of Kent, and the earl of Derby. The dukes of Suffolk and Norfolk were on each side of the Duchess. A canopy was borne over the child by lord Rochford, lord Hussy, lord William Howard, and lord Thomas Howard the elder. Then ladies and gentlewomen.

The bishop of London and other bishops and abbots met the child at the church door, and christened it. The archbishop of Canterbury was godfather, and the old duchess of Norfolk and the old marchioness of Dorset godmothers. This done, Garter, with a loud voice, bid God send her long life. The archbishop of Canterbury then confirmed her, the marchioness of Exeter being godmother. Then the trumpets blew, and the gifts were given ; after which wafers, comfits, and hypocras were brought in. In going out the gifts were borne before the child, to the Queen’s chamber, by Sir John Dudley, lord Thos. Howard, the younger, lord Fitzwater, and the earl of Worcester. One side was full of the Guard and King’s servants holding 500 staff torches, and many other torches were borne beside the child by gentlemen. The mayor and aldermen were thanked in the King’s name by the dukes of Norfolk and Suffolk, and after drinking in the cellar went to their barge.” 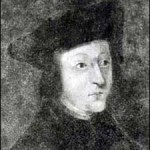 Despite the disappointment from Henry and Anne that Elizabeth was not the hoped for son and heir her christening was still one of great splendor as befitting a royal child. However, not everyone was impressed with the celebrations. Eustace Chapuy’s, the Imperial ambassador, writes in a letter to Charles V (which can also be found in Letters and Papers) that

“The christening has been like her mother’s coronation, very cold and disagreeable. both to the Court and to the city, and there has been no thought of having the bonfires and rejoicings usual in such cases. After the child was baptised, a herald in front of the church-door proclaimed her princess of England. Previously, i.e. from her birth, it was ordered that the true princess should not be so called, and her lackeys were deprived of their goldembroidered coats, which they bore with her device, in place of which the arms of the King alone have been put on them.”

It is important to note that Chapuys was a supporter of Catherine of Aragon and a champion for the rights of Princess Mary, who had been declared illegitimate during the course of Henry’s “Great Matter” and subsequent marriage to Anne Boleyn. Chapuys doesn’t believe Princess Elizabeth is the true heir to the throne and is picking up on anything he can to discredit her position. His words are therefore very biased and should be taken with a pinch of salt, not least because Anne Boleyn’s coronation, which he describes as “cold and disagreeable”, was in fact quite a magnificent affair!

The Last Days of Anne Boleyn