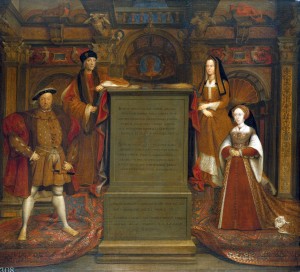 The Whitehall Mural
Remigius van Leemput. From an original by Holbein. circa 1667

The Tudor dynasty was founded when Henry Tudor invaded England and defeated Richard III in the Battle of Bosworth Field on 22nd August 1485. He was crowned Henry VII on 30th October 1485 in Westminster Abbey.

The succession to the English throne had been fought over for many years by the two Royal Houses of York and Lancaster in a series of dynastic wars known as The Wars of the Roses. Henry Tudor was a relative of the House of Lancaster, through his mother Margaret Beaufort. Her great grandfather was John of Gaunt, the son of Edward III. To find out more about the Tudor’s claim to the throne you can view The Tudor Family Tree.

Although Henry was seen by many as the natural Lancastrian heir he actually had a rather tenuous claim to the throne, however, by defeating Richard III he was also able to lay his claim through ‘right of conquest’. To help strengthen his claim he married Elizabeth of York, the daughter of Edward IV, in the hope of uniting the Houses of Lancaster and York. Their son, the future Henry VIII, was born on 28th June 1491. 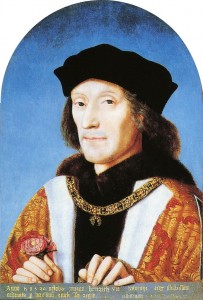 Henry VII secured his throne by building up his wealth and undermining the power of the nobility but he always had to watch out for threats and defeated several Yorkist rebellions, including those by claimants Limbert Simnel and Perkin Warbeck. For all their power and success the Tudors never really felt secure on the throne, Henry VII knew when he became King there were 18 people with a better right to it than him! Right the way up to Elizabeth I’s reign branches of the Plantagenet family tree, descendants of Edward III, were being sent to the Tower of London.

There was also another problem, in order for a dynasty to thrive it requires plenty of children, especially male ones, but the Tudors were not blessed in this depart and many died young or were born sickly. Henry VIII desire for a male heir would lead him to divorce two wives, execute another two and helped cause his split from the church in Rome. It was an obsession that would shape his entire reign.

Henry VII was to rule for 24 years until his death in 1509 when he was succeeded by Henry VIII who had been his second son. His first son Arthur had been born a sickly and weak child and died in 1502, leaving a widow, Katherine of Aragon, the youngest daughter of King Ferdinand and Queen Isabella of Spain. Their marriage had been a diplomatic one so following Arthur’s death Henry VII immediately made plans to marry Katherine to his other son Henry to ensure he kept his alliance with Spain. The rules of the Church forbade such a union because Henry and Katherine were seen to be related to one another but Henry VII managed to persuade the Pope to allow the marriage and Katherine and Henry were betrothed. They were married on the 11th June and crowned shortly after on 24th June 1509. 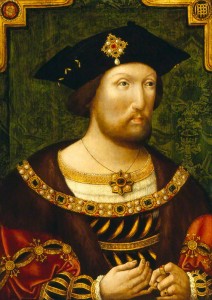 Henry VIII’s marriage to Katherine had been based on love in the early days and they were happy together for 18 years but sadly, although they had 5 children together, only their daughter, the future Mary I, survived through infancy.

Katherine’s advancing years meant trouble in Henry’s quest for his longed for son and his attention was soon captured by Anne Boleyn, one of Katherine’s ladies in waiting. Although Henry had had mistresses in the past Anne was different, she wanted to be more than just a mistress, she wanted to marry the King and any children they had to be legitimate. In order to divorce Katherine and marry Anne Henry needed permission from the Pope. This was to become an ongoing battle that would eventually lead Henry to break with the Church in Rome and appoint himself head of the Church of England. These religious upheavals helped bring England into the wider religious reforms going on in Europe at the time which are known as The Reformation.

One of the arguments put forward by Henry was that Katherine’s inability to produce healthy children and sons was down to the marriage being illegal in the eyes of God. This was a consequence of her being related to him through her marriage to his brother Arthur. However, for the Pope to agree to an annulment on these grounds it would mean declaring that the previous papal agreement, given to Henry to allow the marriage, was invalid, something the Pope would never do. 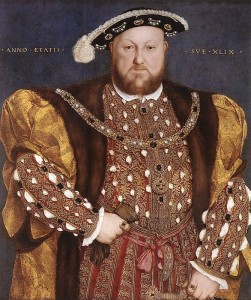 After breaking with the Church of Rome and declaring himself Supreme Head of the Church of England, Henry was eventually able to marry Anne Boleyn which he did on 25th January 1533, she was crowned Queen Consort on 1st June that year. Sadly Anne was also unable to produce the longed for male heir. Henry could never have imagined that their daughter Elizabeth would grow up to be Elizabeth I arguably the most successful of all the Tudor monarchs. Despite risking so much to marry Anne, Henry now wanted rid of her so he could find a wife who would give him a son. By this time his head had also already been turned by another young girl at Court, Jane Seymour. Once again he tried appealing to the Pope, this time declaring his marriage to Anne was illegal because the Pope had never agreed to his divorce from Catherine! The truth behind Anne’s downfall is subject to much historical debate as the evidence is quite scant, however, Henry’s chief minister at the time, Thomas Cromwell, who had his own political reasons to dislike Anne, is believed by many to have been behind her eventual downfall. She was arrested on trumped up charges of treason and incest and executed on 19 May 1536. Shortly after, on 30th May, Henry married Jane Seymour. She bore him a son, the future Edward VI, in 1537, but died 2 weeks later of childbed fever.

Henry married Anne of Cleves on 6th January 1540 but the marriage was not consummated and he had it annulled on 9th July of that year. His next wife was Katherine Howard who he married on 28th June 1540. By this time Henry was a very fat bloated man of 48. He an open sore on his leg from a previous jousting accident which affected his mobility and caused him terrible pain and this made him irritable. Katherine was a young, immature girl of 16, completely unprepared for life at court or as the wife of a King. She had an affair with a courtier, Thomas Culpepper, and was executed on 13th February 1542 for treason.

Henry VIII married his sixth wife, Katherine Parr, on 12th July 1543 and she cared for him until his death on 28th January 1547. He had reigned for almost 40 years.

Henry’s son, Edward VI, was crowned on the 20th or 25th February 1547, but become ill with consumption aged only 15 and died on 6th July 1553. The Duke of Northumberland was keen to keep his newly created powers and the Protestant religion so he didn’t want Mary, the Catholic daughter of Henry VIII, coming to power. As a result he persuaded the dying Edward to name Lady Jane Grey as his successor, above Mary, her half sister Elizabeth or Jane’s own mother, Frances Brandon, who was the daughter of Henry VIII’s youngest sister Mary. Jane married Guildford Dudley, the younger son of the Duke of Northumberland, on 25th May 1553 and was proclaimed Queen on 10th July 1553. Unfortunately the Privy Council changed sides and on the 19th July they proclaimed Mary I the rightful Queen of England. Jane and her husband Guildford were sent to the Tower of London and executed on 12th February 1554. 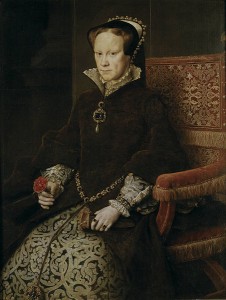 Mary I was crowned on 1st October 1553. She married Philip of Spain in 1554 and became Queen of Spain when he ascended to the Spanish throne in 1556. Mary desperately wanted England to convert back to the Catholic faith. Both her Mother, Katherine of Aragon, and her husband were staunch Spanish Roman Catholics and the split with the church in Rome had been a result of her father’s desire to divorce her mother, something that greatly upset her. During her reign any opposition to the Church of Rome resulted in harsh penalties. In her 5 years as Queen, 300 Protestants were burned at the stake which has earned her the name ‘Bloody Mary’. She died childless on the 17th November 1558.

Elizabeth I succeeded Mary and was crowned on the 15th January 1559. It was to be the start of a Golden age for England, the Elizabethan era.

Elizabeth I restored the Protestant faith and gradually established the Church of England. She was a skilled politician, very clever and could speak 5 languages. The Court and the people loved her, but she still had enemies in the form of Roman Catholics. 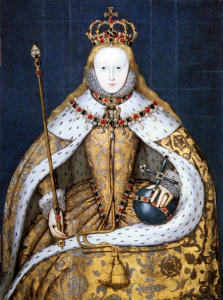 Elizabeth I Coronation
circa 1600

Elizabeth’s main threat to the throne was from Mary Queen of Scots, who was the granddaughter of Henry VIII’s older sister, Margaret Tudor. She was a Queen of Scotland on account of Margaret Tudor’s marriage to James VI of Scotland. They had a son, James V of Scotland, who was Mary’s father. She married Francis the Dauphin of France and became Queen Consort from when he ascended to the throne in 1559 until his death in 1560. When her second husband was murdered, she married his suspected murderer, the Earl of Bothwell. Following an uprising against the couple, Mary was forced to abdicate from her throne in favour of her 1 year old son James and sought refuge with her cousin Elizabeth I.

Mary had previously laid claim to Elizabeth’s throne and was seen by Catholics as the rightful heir, including those who led a rebellion known as The Rising of the North. Mary was seen as a threat by Elizabeth and was confined to a number of castles and manors for 18 years until she was tried and executed on 8 February 1587 for her involvement in the Ridolphi plot, which was a plan to kill Elizabeth and put Mary on the throne.

Elizabeth’s desire to restore the Protestant faith also made her an enemy of her brother in law, Philip II of Spain. He saw it as his duty to overthrow her and restore the Catholic faith in England. He was also angry that she supported the Dutch in their war of independence against Spain. Philip planned an invasion by sending a fleet of warships, known as The Spanish Armada, to sail up the English Channel but their plans were thwarted by English sailors, who included Sir Francis Drake, and the Spanish were defeated. 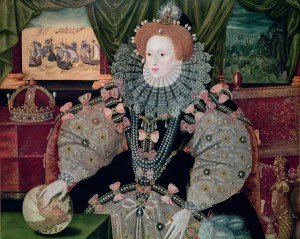 The Armada Portrait
circa 1588

The Elizabethan era was a time that saw great poets, writers, musicians and playwrights, including Shakespeare. Explorers like Sir Francis Drake were discovering new land and riches and Sir Walter Raleigh was exploring the new world after Columbus’ discovery in 1492. It was a time of relative peace after the upheaval of the Reformation and the religious persecution of Mary’s reign. The country was also pretty well off compared to the rest of Europe.

Elizabeth I died on 24 March 1603 and brought an end to the great dynasty of the Tudors. Elizabeth had never married and was childless so she was succeeded by her third cousin, James VI of Scotland, Mary Queen of Scot’s son.

He became James I of England and founded his own dynasty, the Stuarts.

In terms of the entire 16th century the historian John Guy (1988) argues that ”England was economically healthier, more expansive, and more optimistic under the Tudors” than at any time in a thousand years.