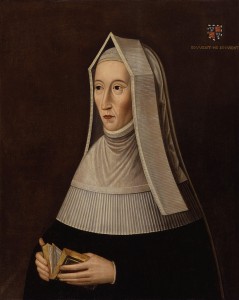 Henry VII’s claim to the English throne comes from his mother Margaret Beaufort who was the great granddaughter of John of Gaunt, the 3rd son of Edward III.

John of Gaunt was the founder of two families, the Lancastrians and the Beauforts.

His son from his first marriage to Blanche Lancaster would become Henry IV, who established the House of Lancaster when he came to the throne in 1399.

John also had children from his 3rd marriage to Katherine Swynford. Some of these children were born before the couple got married and were given the surname Beaufort. Although they were legitimised in 1397, they were forbidden from ever succeeding to the throne.

Margaret Beaufort was the granddaughter of John Beaufort, one of John’s son’s born out of wedlock and therefore technically barred from the succession. John died not long after Margaret’s birth and as his only child she was the heiress to his fortune.

Several of the Beaufort’s died with no children and they also suffered many losses in the Wars of the Roses. After Margaret’s father died his brother, Edmund Duke of Somerset, became the Beaufort heir but he died, along with all four of his sons. When Henry VI died he left no heirs, his son having been killed a few weeks before, which left Margaret as the Lancastrian heiress.

When Henry V died in 1422, his widow Catherine Valois (the mother of Henry VI) married Owen Tudor. Their eldest son, Edmund Tudor 1st Duke of Richmond, married Margaret Beaufort and is the father of Henry VII. This means that Henry VII’s father was the half brother of Henry VI.